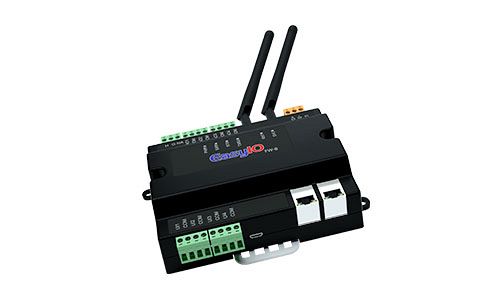 The EasyIO-FW-8 is a new breed, high performance, freely programmable, wireless Wi-Fi Sedona controller. It has never been easier to extend your BMS because of its wireless possibilities. You will save on labor and wiring.

The EasyIO-FW-8 is a perfect fit for vertical markets such as schools and retail, to have extended IO for the F-series controllers, without any downtime during installation as the network can be wireless. It’s ideal for all kind of applications such as fan coils, terminal units, AHUs, room and stand-alone applications, featuring SOX, TCOM, FGP2P and BACnet communication protocols.

The EasyIO-FW-8 can be programmed and live commissioned via free CPT Tools and an integrated HMTL5 dashboard. It has BACnet IP server / client, BACnet MSTP client (combination of BACnet MSTP client and BACnet IP client up to five devices total) and two Ethernet ports for daisy chain connection wiring.

Wired and wireless deployment is encouraged, so there is no need to worry about IT. The EasyIO-FW-8 includes 4 UI (voltage and resistance) and 4 × AO (Voltage). For floating control, the optional FR-02 module is available to add to the FW-8.

OPTIONAL ANTENNAS
There are two optional Wi-Fi antennas for the EasyIO FW-series. They can extend the Wi-Fi signal of an FW controller, if it’s, for example, mounted inside a panel.